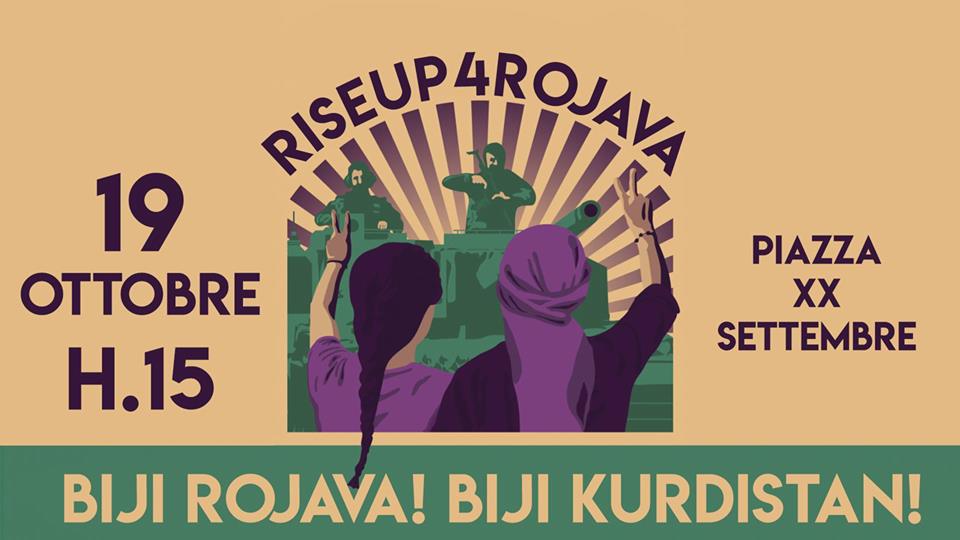 ”Today the Turkish Army started its operation and has started bombardment many places are under heavy artillery attacks. Their goal is to wipe out the Democratic Federation. Several civilians have been killed already and thousand of people have started escaping the danger of ethnic cleansing and Turkish fascism. At the same time Isis is using the Turkish attacks for insurgency.

As the Internationalist Commune mentioned: The imperialist forces have decided to go to war. The troops on the ground are waving the flags of Turkey and of the Islamic State, but the decision was not only made in Ankara but also in the palaces in Washington, Moscow, Paris and Berlin.

In their wake, tens of thousands of members of Islamist gangs will march into Rojava and Northeast Syria. What this means is what we see every day in Afrin, the territory occupied by Turkey: murder, rape, torture and the expulsion of the local population. A new war would plunge Syria and the whole of the Middle East into renewed chaos and drive hundreds of thousands of people into flight from Turkish troops and their Islamist mercenaries.

But if the Turkish government and its henchmen expect their extermination fantasies to become reality, they have not taken into account the resistance of the women’s and people’s defense units (YPJ/YPG) and especially the resistance of the people in Northern and Eastern Syria. Those who have defeated the Islamic state through the sacrifice of thousands of martyrs and the courageous resistance of the population will defend the self-governing areas against a Turkish invasion. We must all do our part and fulfill our responsibility of defending this revolution!

The military, economic and diplomatic cooperation between Turkey, the USA, NATO and European countries must be exposed and politically attacked. No support for Erdogan, his regime and his war! No arms supply and no financial or political aid to the Turkish extermination policy!

If democratic movements decide to put the issue on the agenda: in the media, on the streets, in the factories, businesses and classrooms of their countries, then we can develop a common force against Turkey’s war plans. We must build a permanent political resistance capable of preventing cooperation with Turkish fascism in our countries.

DayX – The moment has come – The war has started!
The situation is clear, we call for global resistance!

Take to the streets, take actions, occupy, disrupt and block!

Show those responsible in the government offices and company headquarters what you
think of their war! Together we can stop the war of aggression of Turkey!

No war against Northern Syria!

The revolution in Northeast Syria will win, fascism will be smashed!”